So stoked to tell you about our next record...... 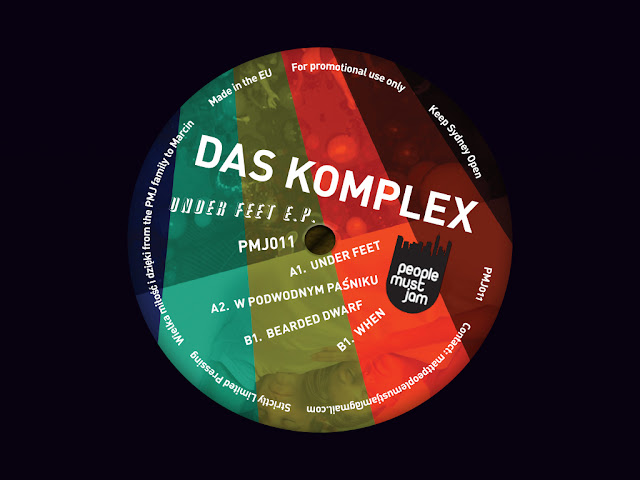 Das Komplex or Marcin to his parents has been steadily putting out incredible music for the last few years, building on an extremely well tailored collection of tracks they have started hitting all sorts of people’s radars no one more so than Dj Harvey who has been supporting his releases at some of his big shows.

A1.  Under Feet - Whilst the people of Australia are dancing the people of Poland are sleeping.  Or vice versa…  Starting off with some lcd fuelled vibes before a psychedelic phasing disco loop appears out of the smoke before twisting the track out in a slightly different direction. 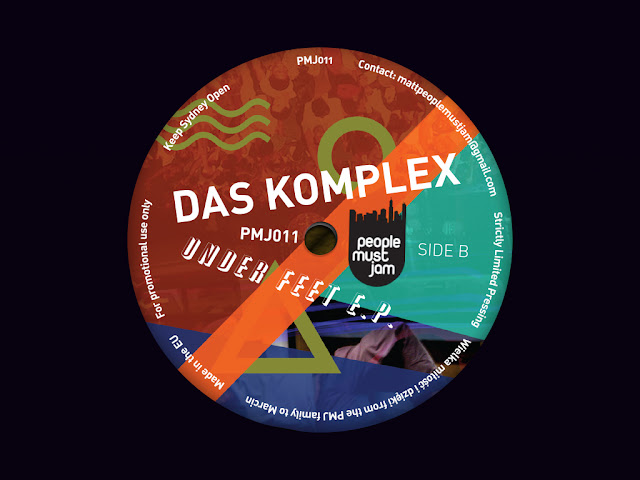 B1.  Bearded Dwarf - Very much sounding like Prins Thomas has been at work here, a big room Scandinavian sounding house track (via Poland!).  Big atmospherics, other worldly vocal samples, lovely guitar snatches and driving piano with the addition of some tribal flute!

B2.  When - Our favourite cut from the EP… Cleverly using a Herbie Hancock sample and layering with disco sounds, vocals and a deep driving bass line to produce his trademark atmospheric, moody house sound.

Keep Sydney Open
Posted by People Must Jam at 9:54 PM No comments: 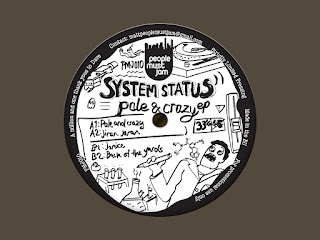 We are back after a little hiatus and not only that we are hitting double figures with our next release.  We have enlisted/begged/bribed the super talent from Cambridge, UK - Dave Rendle to help out with four very special tracks.

Dave, known for his other projects The Detroit Urban Gardening Ensemble and Hazards of Prophecy has released music on Untracked, Out Here Audio, Horn Wax, Stupid Human and his own label Night Sweats Music, catching the attention of global tastemakers Gilles Peterson, Phil Asher, Ashley Beedle, Alex Nut, Ross Allen and Jazzanova as well as receiving the remix treatment from another previous PMJ artist - Inkswel.

Following the title track is Jiran Jaran - born out of a conversation that started on the dance floor at the Worldwide Festival, the question? What would a half Iranian and half Japanese musical collaboration call themselves? Jiran Jaran was born! Henry Wu's releases on Rhythm Section were highly influential on this one.

Janice was a late addition to the EP and it's probably our favourite. Putting into practice the musical teachings of a well known Antipodean musician and producer, Dave uses everything he learned to create a truly amazing track with just enough chord progressions and melodies to make the noodleiest of Jazz warriors smile. With the warm tones of his Arp Axxe baseline shining through, We're hoping Floating Points may get on this one.

The finale Back of the Yards is another special cut - the oldest recording on the EP. It's a Mr Fingers inspired vibe with plenty of Chicago, French and Canadian influences mixed in for good measure... interesting? Check it out!
We are really excited to have been able to share this with everyone.

Like all of our records - pressed on heavy duty 180gm vinyl.

We hope you like it.
Posted by People Must Jam at 1:35 AM No comments:

People Must Jam's ninth record is from one of our favourite DJs and producers.
A guy who has a ridiculously large back catalogue and in our opinion it is a crime that some of his records haven't received bigger recognition.  A true master of House and Hip Hop music, Kid Sublime has been putting out amazing records since 2001. His own label Dopeness Galore literally does exactly what it says on the tin.

Even before we launched People Must Jam's label we wanted Kid Sublime to be a part of it. Now finally we are stoked to present this EP...
Four serious cuts for four different vibed floors - look out!

First up Kid's homage to Techno legend Ben Sims with 'Bang Like Sims' a driving deep Techno groove. Strong percussion, deep stabs and that unrelenting beat are going to ensure this one gets some love on the harder edged, heavier dance floors.

'We The People' heads a little down the tribal route with some afro inspired percussion, haunting samples and that kalimba!
Dropping a really infectious riff before beautiful piano melodies drift in and out of the mix. Wonderful stuff.

The title track 'I like 'em dirty'; we feel, is a lesson in proper Deep House.
Classic sounding house beats, little guitar licks, deep stabs and the vocal sample combine for this perfect house cut. Massive.
The EP is rounded out with another cut in tribute to the legend that was Kenny Hawkes.
Another master of his craft - Kenny sadly now passed on but his spirit is well and truly alive in this fitting tribute. 'One 4 Kenny' features strong percussion, low bass, deep stabs and slamming beats = cracking stuff.

As always limited 180gm pressed vinyl.
We hope you like it.
TRACK LISTING
A1. Bang Like Sims (Organic Dub Mix)
A2. We The People
B1. I Like 'Em Dirty
B2. One For Kenny
Posted by People Must Jam at 4:14 AM No comments:

Stand by for our latest record which is about to hit the shops any day now.

This time we headed to Ibiza via Italy to track down Riccio for the next installment on People Must Jam. 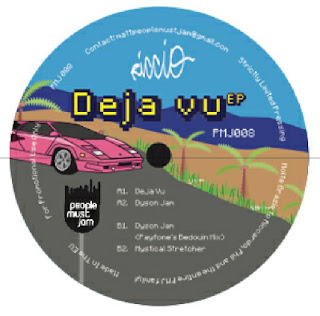 As the climate cools down in Australia, temperatures are rising in Europe and one of Italy's finest selectors has taken charge of People Must Jam's eighth record.
Deja Vu is a EP that has been a long time in the making. The result, we hope you will agree has been worth the wait.The title track kicks the EP off with a killer funk groove that Riccio works into something we think Mark E would be happy with.Dyson Jam is an original cut that channels some of his inner Moodymann vibes - heads down, lights down, fader up...For the B side we asked the incredible Payfone (who has been racking up a solid string of releases on Golf Channel) to remix Dyson Jam and he has created a perfect contrasting remix to the rest of the tracks of the EP.


A deep journey that takes the original into sub-dawn territory. 4am vibes!The final cut of the EP Mystical Stretcher, is a late night jazzy Funk number. Again a little Mahogani inspired...Like most of our records this is cut on 180gm heavy duty 12" vinyl and is limited to 300 copies. We hope you like it.

Posted by People Must Jam at 3:42 PM No comments:


Thanks to everyone that bought Ptaki's outstanding record the Antypody EP. We are very happy with the reaction the record got both in Australia and overseas. The Ptaki boys created a cracking record there.

Our next record that has just hit the shops this week is from one of our favourite guests that has played at People Must Jam.  Al played for us in 2011 and threw down one of the best sets we have witnessed to date. Hopefully this year Al will return to Australia to play for us at a very special party but until then we can present this killer record....

Our seventh record is a track that has been burning up the People Must Jam dance floors for years in its previous form - Al Kent has created a disco dance floor beauty! An unreleased monster that first came to PMJ's attention through the now legendary DJ History website.

This track has been retouched and re-mastered for its vinyl release nearly eight years after its inception, we are really proud that this is seeing the light of day and will finally be available for people to get their hands on.  Mastered at The Carvery for added bump and shine. The record is a strictly limited 10" pressing.

Posted by People Must Jam at 2:38 AM No comments:

For the sixth release on People Must Jam, we headed to Poland to find two very special guys that make up Ptaki. Ptaki have been making ripples around the world for their unique approach to putting together a record or two and having just recently dropped their album Przelot those ripples have turned to waves. We are proud to announce their new record - Antypody that will possibly turn those waves tidal!

We are really stoked to have these boys on board for what we feel is going to be a very sought after record.

Posted by People Must Jam at 11:33 AM No comments:

Andy Ash - Hurricane Fantasy (PMJ005) has well and truly hit the stores, infact so much so that there are only limited copies left.  The release featured three cracking originals from Andy.

The title track "Hurricane Fantasy" is a disco/jazz looped summer house anthem.  "Move" is a straight up solid house number and "Dommah" takes the EP into wonderful techno territory.

To complete the record we also asked our friend Ron Basejam to do a remix of "Move" which he turned into a Croatian summer anthem.

We have had huge support on this one from the likes of Thatmanmonkz (Shadeleaf), Cottam and the Sleazy Beats crew.

Like all of our records; this is pressed on 180gm vinyl.

Hope you enjoy the record!

Posted by People Must Jam at 11:23 AM No comments:

NO TICKETS ON SALE